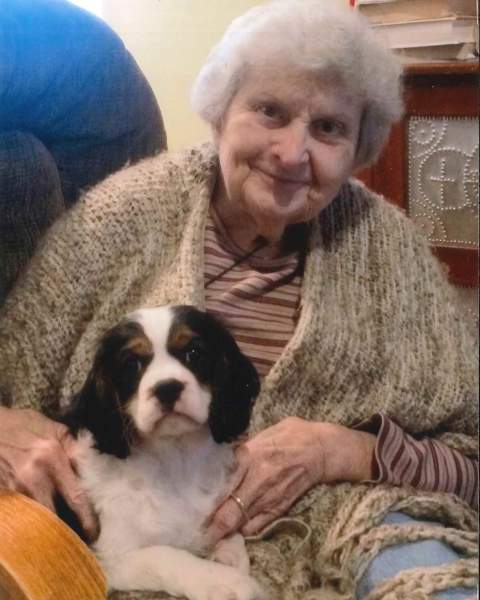 She was born in her childhood home on February 2, 1933, in Dunellen, New Jersey, the daughter of William and Rose (Humiencki) Kania.

At an early age she was noticeably gifted, learning to play the violin at age 4, and skipping the second grade. She was an exceptional pianist later playing for her Glee Club (among others) at Dunellen High School which she graduated (never missing honors) in 1950. She continued piano throughout her life leaving her children many fond memories of waking up to her playing on Saturday mornings.

In 1953, while working at Mac Motors, she met the love of her life, Edward Paul Hahr, Sr., who after three dates proposed to her and a year later, they were married.  They shared 52 years together before his passing in 2006.

Joan’s priority in life was her devotion to her family.  She was incredibly artistic and talented and enjoyed many hobbies throughout her life.   She was a cook, painter, maker of porcelain dolls, rugs, leather pocketbooks, seamstress even sewing her own bridesmaid’s dresses as well as her daughter Joanie’s wedding dress, and her son Father Karl’s elaborate vestments.  She was a founding member of the Kirby Quilters, as well as a Kirby Hilltopper 4-H leader.

While raising her ten children she worked alongside her husband Ed, as a bookkeeper for Hahr Construction. She later enjoyed a career in sales working for Hovey Shops, Ben Franklin, PJs Hallmark, Bib & Tucker, Aubuchon, and Duck Soup, jobs that she never had to fill out an application for, but for which she was recruited. She greatly enjoyed her interactions with her customers.  Mostly, she worked so that she could shower her children and grandchildren with beautiful gifts.  She always wanted to give the perfect gifts for birthdays and holidays.

Throughout her life she was a great example of a deep faith in Jesus Christ and was a communicant of Corpus Christi Parish.  In 2010, while working at Duck Soup, she collapsed. It was later determined that she had a tumor inside her heart.  Through the power of prayer, she was a walking miracle, as it was successfully removed after several weeks of hospitalization and a day and night surgery.

Along with her husband she was also predeceased by her parents, her sons Steven (2012) and Hans (2021). She was also predeceased by her siblings Mary and husband Frank Niederle, and Harriet and husband Louis Scalera, as well as her in laws: Thomas Lawrence, Edward G. and Virginia Hahr, Virginia and Ray Whalen, Eugene and Rita Hahr, Joseph Hahr, Arthur and Barbara Hahr, Ceceila Conover, and Paul Hahr.

She is also survived by numerous nieces and nephews.

Visiting hours will be at Sayles Funeral Home on Friday, September 16th  from 6-8pm for the public, with a prayer service at 8.  A Mass of Christian Burial will be celebrated at St. John the Evangelist Church, Saturday, September 17th at 11 AM, with her son, Rev. Karl Hahr as celebrant.  Burial to follow immediately at Mt. Calvary.  Friends and family are also invited to the family home at 109 Sanger Circle, St. Johnsbury, Center following the burial.

Memories and condolences may be shared with the family at www.sayles.com

To order memorial trees or send flowers to the family in memory of A. Joan Hahr, please visit our flower store.