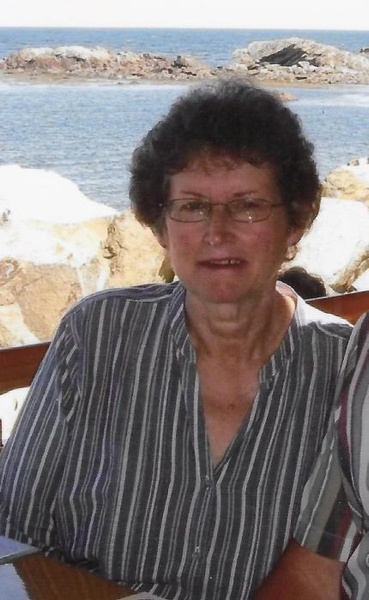 Audrey Ann “Gertie” (Switser) Hearne, 67, of Sheffield, VT, passed away peacefully at her home with her husband, Mike, her family and friends by her side on Saturday, August 17, 2019 after a courageous battle with cancer.

Audrey was born on June 10, 1952 in Lyndonville, VT to Reginald and Fargo (LaRoche) Switser.  She was raised and educated in Burke and Lyndon, graduating from Lyndon Institute in 1970.  She graduated from CCV with an associate’s degree in human services in 2002.

Audrey worked for Rural & Agriculture Vocational Rehab at UVM Extension for 38 years before retiring there in 2012. She found her work as a counselor very rewarding helping people with disabilities.  She was also a medical transcriptionist for Concord Health Center for 5 years, worked for St. Johnsbury Trucking for 4 years and Poulos Insurance for 2 years.

Audrey married the love of her life, Michael Hearne on September 10, 1994.  They enjoyed 25 years together camping, ATVing, Nascar races with friends.  Mike and Audrey made many new friends while doing these things and often even coworkers would turn into lifelong friends.  They enjoyed motorcycle rides and holiday gatherings with family.  When they first met, Audrey would travel down to Chester to ride with Mike in the groomer on Bromley Mountain.  They also enjoyed blue grass festivals and camping at Tree Corners. Ever year on their anniversary they chose a destination vacation including Niagara Falls, Nova Scotia, Mount Washington, Harts Turkey Farm Restaurant and the coast of Maine which was their favorite destination. Easter was a special holiday for them.  They spent many hours and a lot of love preparing the perfect Easter egg hunt for the family children at their home.

Audrey was very connected to her family and friends.  She enjoyed shopping with the girls, camping, dance recitals, ball games, auto racing and pony pulling with family.  She celebrated every milestone for each person and picking out the perfect gift.  She enjoyed country music, attending concerts and visiting the Grand Ole Opry.  Back in the day, she loved to dance to rock n roll and disco.  For several years she was on a bowling team that she enjoyed greatly.  The #11, Denny Hamlin was her Nascar driver, winning at Bristol the night she passed away.

Audrey loved Vermont and all its seasons.  She enjoyed tending her flower beds and all their beauty.  Birds were special to her and the hummingbirds brought her much peace and pleasure while she was sick.

Audrey is survived by many close friends, some have been like sisters.  She was like an aunt to many of her friend’s children.  She believed in order to have good friends, you have to be a good friend and she was a great friend.

For those wishing to make a donation in Audrey’s name in lieu of flowers, donations can be sent to Caledonia Home Health and Hospice, 161 Sherman Drive, St. Johnsbury, VT 05819.

Family and friends may call on the family on Friday, August 30, 2019 from 6-8pm at the Guibord Funeral Home, 15 Main Street, Lyndonville, VT.  The funeral will take place on Saturday, August 31, 2019 at the West Burke Methodist Church at 11 am with the Rev. Ann Hockridge officiating.   The burial will take place immediately following the service at the William Dexter Cemetery in Sheffield, VT.

To order memorial trees or send flowers to the family in memory of Audrey Hearne, please visit our flower store.