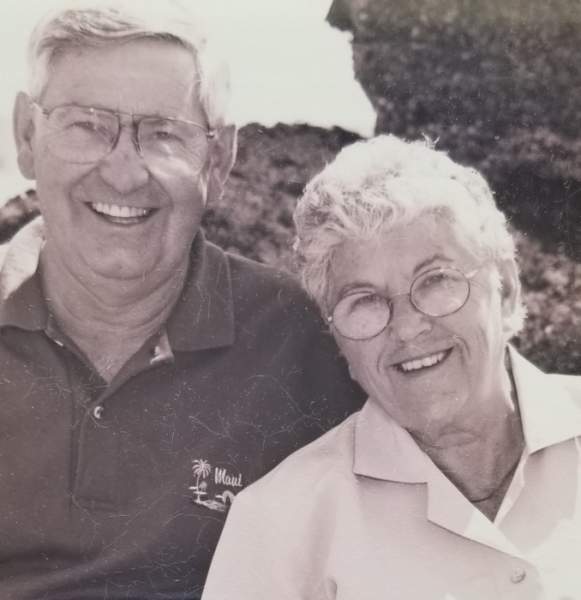 Bernice Barbara (Crepeault) Ash passed away peacefully on Saturday, July 31, after a long term illness. She is predeceased by her husband of 59 years (Melvin Rodney Ash), her son (Keith Charles Ash) and baby daughter (Kathy Mel Ash). She is survived by her daughter (Lorrie “Lee” Ash) and her favorite grand dog (Adeline the Corgi).

Bernice was born in Saint Johnsbury on February 5th, 1934, to parents Philip and Hazel (Champany) Crepeault. She was a graduate of St Johnsbury Academy, Class of 1952. Upon Mel’s return from the Air Force during the Korean War, she and her husband were married at Saint Aloysius Church on June 15th , 1957. Together they started a family and took part in assisting her sister and brother-in-law (Doris and Dr. John Stetson) and Dr. Harvey Stetson in the family veterinary business: Stetson’s Animal Hospital. The Ash family ultimately lived at the location of the new animal hospital across from St J Academy, assuring that pets were not left alone during their stays.

Bernice went on to become Dr. John’s daily assistant and she served in that capacity for the next thirtyfive years. Without an animal shelter available to the townspeople, many stray animals found their way to the hospital and she regularly found homes for many of the animals, later aided by the addition of a local newspaper posting in the Caledonian Record.

Among some of the many memories of Bernice were her love of Christmas and the many baskets of baked goods, jams, maple butter, chocolates and homemade wreaths that became a family activity through the years. In the early 70’s, the family bought a waterfront camp on Harvey’s Lake. This started many years of weekly summer family gatherings and good times with cookouts, boating, games and storytelling. Bernice always offered an open invitation to neighbors, friends and relatives and often hosted many birthday, graduation and anniversary parties. She loved her family and was always there for everyone; friends even referred to her as “Aunt Bern”.

Bernice and Mel enjoyed time with their children in later life, making occasional visits to Montreal, Boston, Cape Cod and Florida. She often reminisced about their anniversary trip to Las Vegas and seeing Frank Sinatra, Sammy Davis and Liza Minnelli in one of their last shows together.

Bernice will be celebrated at a gathering to be posted at a later date. Condolences and memories of Bernice can be sent to Saylesfh.com. Donations in her memory can be sent to Caledonia Home Health Care & Hospice 161 Sherman Drive, St.Johnsbury, VT 05819 or to an animal shelter of your choice. The family wishes to thank the staffs at Hospice and St J Health and Rehab Center. An extra special thank you goes out to her longtime devoted personal care family: Angela, Larayne, Trinity, Jason and Harlee.

To order memorial trees or send flowers to the family in memory of Bernice Ash, please visit our flower store.