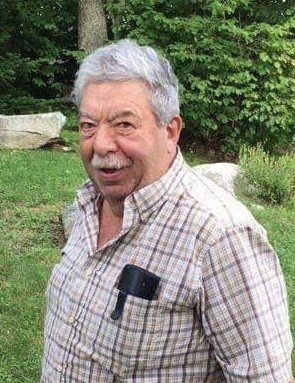 Berton Richard Frye, “Bert” to most who knew him, died at the age of 77 on Sunday, March 15, 2020, following a brief illness.   Bert loved his family, community, dairy farming, and country music, but most of all, loved telling stories.  He blessed his whole family by providing them with a wealth of information about their own history, and that of others, and some of it was even true.

Bert’s own story began on March 31, 1942, when he was born in St. Johnsbury, Vermont to George Frye and Ramona Mae Hutchins Frye.  Bert was the fifth of sixth children raised on the family’s dairy farm in Danville, and by his own impartial assessment, was the best looking of the bunch.  Bert and his younger brother William “Bill” Frye took over the farm after their father’s death in 1953.   Bert initially attended the one room schoolhouse in Harvey’s Hollow, and took seriously his obligation to make every day a challenging one for his teachers, so things would never feel stale for them.  Bert then attended and graduated from Danville High School, where he played basketball, took guitar lessons, and was on the student council.  Bert also participated in the glee club, which sadly missed out on fame by not allowing him to sing “Heartaches By The Number.” Bert was very active in Future Farmers of America (FFA) throughout all of high school, and represented the school and dairy farming in Vermont and Chicago.  Bert made his television debut on “Across The Fence,” but ultimately decided to leave the celebrity world behind.  Bert was named Regional Star State Farmer and accompanied Vermont’s Governor Robert Stafford to the 1960 Eastern States Expo.  Bert also enjoyed showing and pulling many horses over the years, including Chief & Champ, Kit & Rose, and Richard & Pete.  Bert’s future ownership of several riding horses coincidentally increased during years in which his children were teenagers, knew significantly more about everything than he ever did, and he much preferred that the horses listen to the daily troubles.

Bert’s main girls for many years were his Jersey cows, who undoubtedly helped him perfect the skills he used to earn the nickname “Bert The Flirt.”  One of his few stated regrets in later life was how he devastated the female population of Danville and beyond, after he decided that Virginia (“Jini”) Randall was the one to marry on January 22, 1961.  The couple raised their three children on the Frye dairy farm. After the completion of a new barn, Bert thought it only natural to start hosting parties there every Saturday night, with live bands, for 200 or more of his closest friends.   In September of 1969, the first Frye’s Barn event was held, and this family run business continued until 1993, eventually expanding to include an outdoor stage for summertime events.   It was a weekly circus of loud music, louder crowds, and late nights, with Bert as the ringleader, but the rest of the family, the customers, the bands, and even the cows were all valued and necessary parts of the show.   Bert brought many well known acts to the area, including Dick Curless, Boxcar Willie, Hank Snow, Ernest Tubb, and Little Jimmy Dickens, along with crowd favorites like Stan Jr and Robin Right; he was also a long time voting member of the Country Music Association.  Bert took his family to concerts whenever possible, and felt certain that watching him finagle his way backstage far surpassed anything the children would learn during the last two hours of an average school day.

Despite the incredible financial success and secure, lavish lifestyle that everyone knows dairy farming provides, Bert sold his Jerseys in 1989.  By then he had entered the Ag Bag silage market, and had opened Frye’s Quarry, which provided crushed aggregate to towns, businesses, and private citizens throughout New England and beyond.  Bert owned many pieces of heavy machinery, and took pride in his completed projects, including incredible stone walls.  At one point Bert started spending his limited free time moving one pile of dirt to another on family owned property, and it turned out that he was in fact building two beautiful ponds.   His hard work provided many summer afternoons of Bert smiling and watching generations of kids and dogs splash together, while waiting for someone to hand him a burger already.

Bert belonged to the Grange, and both Junior and Danville Chamber of Commerce for many years.  He had a thirst for knowledge about all things Vermont and felt strongly about fulfilling his civic duty.   Bert had a remarkable memory, especially when he was right.  Participating in the annual town meeting was important, as was getting a good seat at the luncheon provided for attendees.  Bert was appointed by state leaders to commissions studying the transportation and roads in Vermont, and was part of the commission to study the Marriage Equality Act.  Bert took these positions seriously, and was extremely proud to see equal marriage for all in the end.

Bert was a long time member of the Danville Congregational Church, and believed that by providing the sanctuary Christmas tree for many years, he could call it even as far as the Sundays he missed.  Bert kept track of his forest over the years, and the height of a ceiling rarely factored into the equation when it came to a tree he had in mind for someone special.

Following a devastating house fire in 2014, Bert and Virginia relocated to their son’s home until the farmhouse could be rebuilt.  This was completed with Bert providing lumber he had cut to be used for the floors and stairs.  Bert was able to enjoy his final year back in the home that he loved, in front of the fireplace he had built, and welcoming any visitor who would bring him pie.

Bert was predeceased by his parents, George and Ramona, along with his sisters Louise Hale, Marylene Sevigny, and Georgiana Page.  Bert was also predeceased by his brother, John Frye, and his mentor, Dr. Melvin Somers.  Bert is survived by his wife of 59 years, Virginia, and his brother Bill, along with his daughters, Barbara (Daniel) Sweet, Betsy Frye (Joseph Longbottom), and his son, Jeffrey Frye.  Berton is also survived by three biological grandchildren, Jessica and Jason (Pam) Sweet, and Zoe Frye Longbottom, and a great grandchild, Daniel Sweet.  He will also be missed as cherished Grandpa to Jennifer (Jeremy) Fournier, Daniel (Lauren) Sanabria, and an adored dog named Betty, as well as many nieces, and nephews.  In addition, Bert leaves behind many special friends, including Gordon Hale, Charlie Palmer, Noah Alonso, and those with whom he met to solve the world’s problems every morning at Hastings Store.

The ultimate insult for Bert would be to throw a party and have nobody show up.  There will be a celebration of life, date to be announced, and a private burial on the Frye farm.  In lieu of flowers, the family requests that contributions in Bert’s memory be made to The Mountain View Farm Animal Sanctuary, Box 38, East Burke, VT  05832 (innmtnview.com/animal-sanctuary), or to The Open Door, located at 29 Hill St., Danville, VT 05828.

To order memorial trees or send flowers to the family in memory of Berton Frye, please visit our flower store.