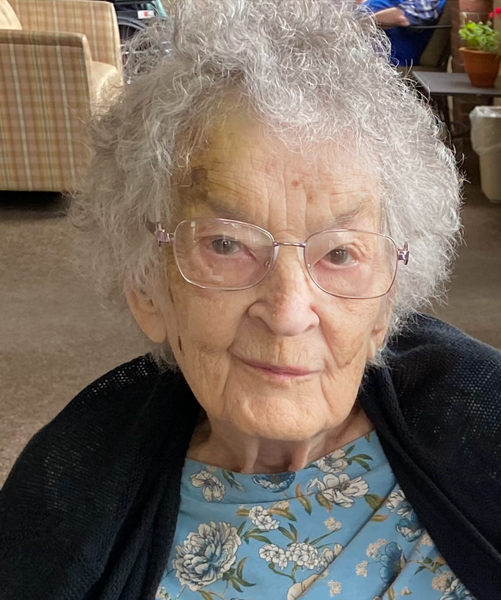 Beulah was born in Hinsdale, NH, on October 10, 1926, daughter to the late Levi Jerome and Ruth Andrews (Streeter) Howard.  She was raised and educated in Hinsdale, graduating from the local High School before moving to Boston to study for her degree as a Lab Technician. She married Conrad “Connie” Holden on March 9, 1947 and shared 48 happy years together until his death in 1995.  After Connie passed away, she moved to Newark, VT, to be near to her son, Chuck, and his family.

Before moving to the Northeast Kingdom, she spent her career as a pediatric office nurse working for Dr. John Houpis in Brattleboro, VT, where she helped to make doctors visits easier for both children and their parents.

Beulah was loved by all. She always put others needs before her own. She was a talented basket-maker and needlepointer. She was an extra-ordinarily good cook; no one made a better apple pie than Beulah.

She is survived by her daughters: Pamela Holden-Follows and her husband, Mick, of Roslindale, MA; Frances “Frankie” Denny of Beccles, England; and Christine Carlsen of Jamaica Plain, MA. She has 5 grandchildren: Amber, Jesse, Cody, Tracey & Alison, and many great-grandchildren. She was predeceased by her son Jerome Charles “Chuck” Holden and his wife, Audrey, as well as her sister Barbara O’Connor. Beulah is also survived by her dear friend and care-giver, Pam Lund of Newark.

A Celebration of Life will be planned for next summer at her home in Newark. At her request there will be no Calling Hours.

Memorial Donations may be made in her name to Caledonia Home Health & Hospice, 161 Sherman Dr, St Johnsbury, VT 05819.

To order memorial trees or send flowers to the family in memory of Beulah Holden, please visit our flower store.