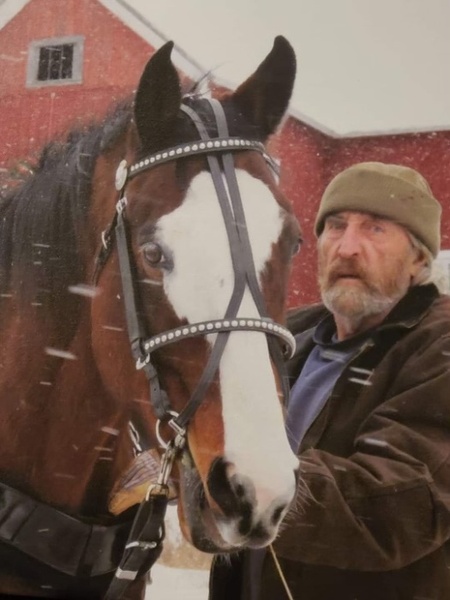 Charles Albert Faulkner, age 82, of Lyndonville, died on Thursday, December 16, 2021 at Dartmouth Hitchcock Medical Center in Lebanon, NH with his family by his side.

Charlie was born on June 6, 1939, in Brattleboro, VT, to the late Neal S. and Mary (Chase) Faulkner.  He grew up in Jacksonville, VT and graduated from Jacksonville High School in the Class of 1957.

After graduating high school, he started working as a mechanic for Roberts Chevrolet in Jacksonville before moving on to drive a milk truck for Murdock Trucking.  Later, he moved his family to Gilford, VT and started work for Henry Transport which led him to Saxton’s River to manage a second shop for Henry.  After Henry Transport shut down, Charlie took a job working for St. Johnsbury Trucking with the likes of Larry Cooke and Ken Sanderson which left him with many stories to tell of his time there.

Charlie is probably best known for riding his Harley Davidson motorcycle, his maple sugaring and riding his favorite horse Chinook; all the things he did until he was no longer able.

There will be no Calling Hours or services at this time. A Celebration of life will take place from 1-4pm on May 1, 2022 at his home, 188 Couture Flats, Lyndonville, VT.  All are welcome to attend.

To order memorial trees or send flowers to the family in memory of Charles Faulkner, please visit our flower store.