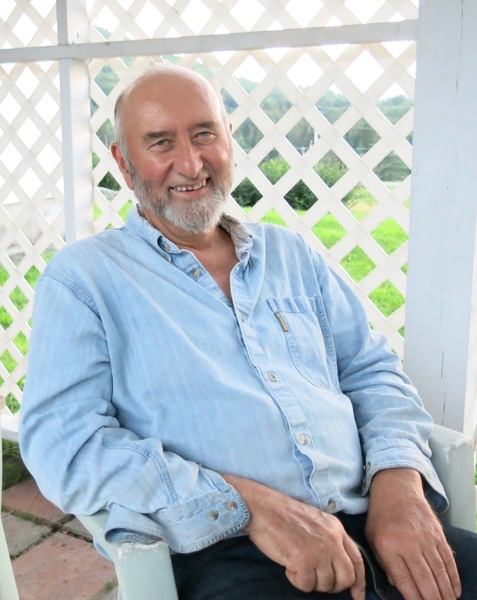 Charles Reginald McMahon, of Waterford, VT, died at home on July 10th, 2021, surrounded by his family, just 10 days short of his 75th birthday.

Born in New Milford, CT, on July 20, 1946, he was the son of Dorothy Quincy Taylor McMahon and James Martin McMahon. Charlie graduated from New Milford High School in 1964, and was drafted into the U. S. Army in January of 1966. He served in the Arms Room and then as Supply Sergeant at Fort Carson, Colorado. Following an honorable discharge, he worked as an auto mechanic and owned and operated McMahon’s Auto Body in New Milford, followed by 18 years as a mechanic and crane specialist for Kimberly-Clark Corporation. After moving to VT in 1996, he worked for New England Electric Wire in Lisbon, NH.

Growing up next door to a Jersey dairy farm in New Milford inspired his love of farming, and he consistently found a way to indulge that passion, regardless of where else he worked, first by raising calves in his parents’ garage before building his own house and barns next door, and eventually having a small farm with five milking Jerseys, a barnful of Southdown sheep, the occasional pigs and chickens, and always a large organic vegetable garden. He was active in the Litchfield County Connecticut 4-H Dairy Club, as well as the 4-H Sheep Club.

A few years after retirement, he was diagnosed with a bone-marrow failure disease, and though it slowed him down, he never gave up hard work, good humor, or hope. After being a long-time blood donor himself, it was periodic blood transfusions which gave him nearly six extra years of life. Please honor him and others by becoming a donor of red blood or platelets. It truly is the gift of life.

Charlie was a good, gentle, humble man with a deep appreciation for the many blessings in his life. He was always curious about how things worked, whether down-to-earth machines or the vast Universe. He was devoted to his family and is survived by his lifelong sweetheart, and wife of 56 years, Patricia, and by his beloved children, Molly and husband Brant Schreiber of Waterford, VT, and Jonathan and wife Michelle Dalbec of West Stockbridge, MA; by his adored grandchildren Elijah and Annalee Schreiber; by his siblings, Barbara Dratch, of New Milford, CT, Martin McMahon, of New Milford, CT, and James McMahon, of Londonderry, NH.; and by his nieces, nephews, and cousins.

A memorial celebration will be held at a later date.

To order memorial trees or send flowers to the family in memory of Charles McMahon, please visit our flower store.