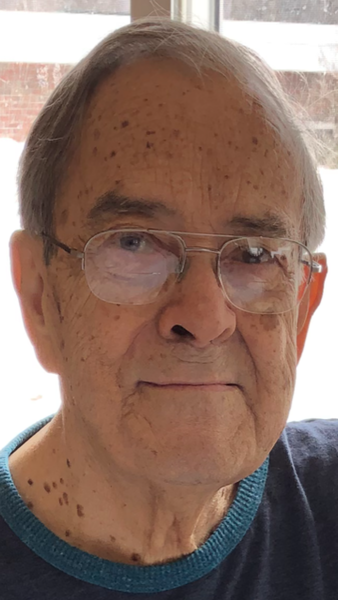 St. Johnsbury lost one of its most beloved citizens on Tuesday morning, June 18, 2019.

Conrad was born on July 3, 1929, in Morgan, Vermont to Leopold Doyon and Emelda (nee Fateaux) Doyon. The eldest of four children Connie was raised on the family farm in Kirby where French was the language of the household. Connie loved learning and believed in the power and democratic tradition of a public education. His elementary grades were spent at a one room school house in Kirby where he leaned English and became a top student. During high school he would ride his horse, “Speedly,” down the Kirby Mountain road each day to meet the Lyndon Institute bus. A National Honor Society member, Connie graduated from Lyndon Institute in 1948 and attended the University of Maine in Orono, and The Stonier Graduate School of Banking at Rutgers University.

The great love and partnership of Conrad’s life has been his wife Theresa. They married on July 11th, 1959 and would have celebrated 60 years of marriage this summer. Theresa survives him, as do his three children: Lisbeth Gee and her family of Hillsboro, N.H.; Timothy Doyon and his wife Patsy and their two sons Heath and Nathan, of Waterford, Vermont; and Deborah Doyon and her son Odin of St. Johnsbury, Vt. Surviving siblings include Connie’s sister, Marina Nadeau and her husband Wendell Nadeau of Enfield, Conn.; and brother, George Doyon and his wife Liz of San Antonio, Texas.

Connie had a distinguished professional career, serving as the Vice President of The First National Bank (merger to Howard Bank), and later as the Personnel Director and Financial/Credit Collections Officer for the newly established Northeast Vermont Regional Hospital (NVRH). It was, however, as a dedicated, principled and passionate public servant where he won the respect, admiration and love of so many within St. Johnsbury, the Northeast Kingdom and the State of Vermont. In 2006, Secretary of State Deb Markowitz recognized Connie with a Vermont Public Service Award for his more than 50 years of volunteer service noting that he was an “unsung hero of our democracy.” A Rotarian, Lister, and Act 250 Commissioner, Connie was also one of the Founders and the first Treasurer of Vermont Student Assistant Cooperation, a Trustee and Treasurer of St. Johnsbury Hospital, and NVRH, on the Board of Directors for NVDA, Board of Corporators at NVRH, and a trustee of Public Funds for the town of St. Johnsbury and past President of the Vermont Institute of Banking.

A life-long Democrat and the Democratic Chairman for Caledonia County and the State of Vermont, Connie helped to launch the careers of many State and National leaders including Governors Madeline Kunin and Howard Dean, Senator Patrick Leahy and Congressman Peter Welch. Connie and Theresa’s living room was a joyful gathering place for politicians and community members to discuss their ideas and aspirations, and to strategize and build campaigns and coalitions. Connie, however, chose to serve his community and State more quietly. He repeatedly declined Governor Dean’s suggestion to run for State Senate, but was a dedicated Justice of the Peace for 65 years; a role in which he championed equality and inclusion for all. He celebrated the passage of Vermont’s civil union and marriage equality laws and presided over multiple same-sex civil unions.

A true gentleman with the warmest of handshakes, a quick wit and a kind word for everyone, Connie Doyon, will be deeply missed by his loving family, large circle of friends, and grateful community.

In keeping with his humble demeanor, Connie has asked that there be no calling hours or funeral services. Instead, the family requests that friends and well-wishers dedicate some time to public service in Connie’s honor, participate in public life, vote their conscience and care for their neighbors and communities.

To order memorial trees or send flowers to the family in memory of Conrad 'Connie' Doyon, please visit our flower store.