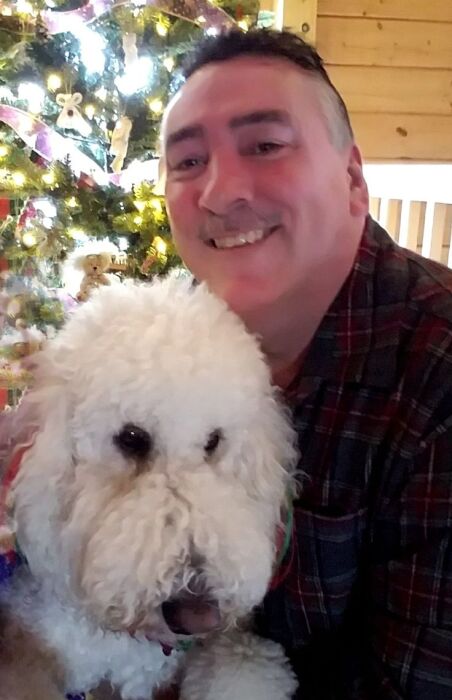 Daniel was born in Bridgeport, CT, on December 17, 1963, son to Sally Maureen (Gallagher) and the late Charles Leslie Peal.  He was raised and educated in Bridgeport at Harding High and Bullard Haven’s Tech Schools through the Class of 1981. Learning from his father, who was an auto mechanic, Dan developed a strong work ethic and took great pride in what he did, owned and maintained. Dan trained as an electrician and earned his Master Electrician’s License and established DP Electric in 2000 in CT.  He eventually obtained licensure in Vermont and New Hampshire.  He ran demolition derby with his father a number of years in car #807, which was also the number of his Dad’s Navy ship, the USS Benner.

On October 27, 2011, he met Jeanine Hubbard and in the spring of 2012 the move to Vermont was permanent. They built a log cabin from the ground up in Newark in 2013, married on April 2, 2014 and never looked back. He became the campus electrician for Lyndon State College, now NVU, in June of 2015. He was a huge Denver Broncos fan as well as that of NASCAR’s Jeff Gordon #24. He also liked taking his boat out on the lake and the river, motorcycling and snowmobiling. He quickly came to enjoy the quiet life in the Green Mountain State. A few other favorites were Mayo’s sausage from Nashville, Reese’s peanut butter cups, playing football and frisbee with Jozy, his 4 year old Golden Doodle, and getting back into riding.  He recently took a big ride along with Jeanine down the Kancamagus highway on his motorcycle.

At Dan’s request services were private. There were no public calling hours.

Memorial donations may be made to Caledonia Home Health and Hospice, 161 Sherman Drive, St. Johnsbury, VT 05819.

To order memorial trees or send flowers to the family in memory of Daniel Peal, please visit our flower store.