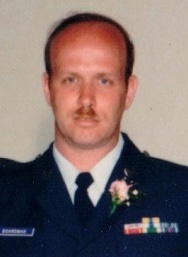 David was born on April 3, 1957, in Concord, VT, at the Austin’s Nursing Home which served at the birthing center for Dr. Dixon at the time.  He was the 6th child of Gerald Robert and Benita Joan (Miller) Boardman.  David was raised and educated in Danville graduating from Danville High School in the Class of 1975 and then entered the U.S. Air Force until 1999 retiring with the rank of Master Sergeant. He worked in EOD serving overseas in Guam, Spain, Germany, Turkey, and Saudi Arabia and stateside at Otis Air Force Base in MA, Polk, NC, and Shreveport, LA and during Desert Storm.  While on leave, David worked with Burt Frye on the farm and at the stone quarry after the service.  Following his time in the Air Force he worked at Lydall Inc. in St. Johnsbury and then followed the company to Hamptonville, NC, giving them 20 years.

David loved to camp at Stillwater in Groton State Forest.  He enjoyed working on his own vehicles including a Harley Davidson that he completely refurbished. He enjoyed riding the Harley as well as working on it.  He also loved being a father figure and taking care of Joe.

A Graveside Service will take place in the spring.

Donations in David’s name can be made to the American Cancer Society, 55 Day Lane, Williston, VT 05495.

To order memorial trees or send flowers to the family in memory of David Boardman, please visit our flower store.