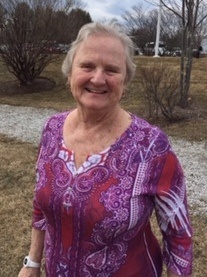 Fay was born on the Outer Banks in Wash Woods, NC on August 16, 1934, to Raymond and Dona (White) Williams. She lived in the Norfolk and Virginia Beach area and spent many wonderful years in Annapolis and Ocean City, MD before settling in Tampa Bay and Bradenton, FL area in 1977.  When Alzheimer’s began to touch Fay’s life, Donna and family moved her to Vermont for assisted living situations. She had recently received over 4 years of care by the gracious and attentive staff at the Meadows in Rutland Vermont, where her family, including the London family via the technology of this generation, was able to share her last breath.

Fay was a homemaker as well as a career woman.  She and her husband, Bob, ran a number of Bowling Centers throughout Maryland from the mid 1960s through the 1970s, after which, Fay worked as an administrative assistant for the Longboat Key Fire Department in Longboat, FL. She retired in 1996. A faithful and spiritual Christian, Fay enjoyed over 30 years singing in the Oneco Methodist Church Choir in Florida before she transferred to the Lyndonville United Methodist Church in Lyndonville, VT, where she was still a current member.

Survivors include her daughter and son-in-law, Donna and Michael Wheeler of Lyndonville, VT along with their daughters, Amanda Wheeler and partner Charles McDonough of Mendon, VT and Ashley Ruddy, husband Patrick and son Michael Patrick, of London, England.  Fay is also survived by Janice White Schindler of Bradenton, FL who was a cousin but more like a sister; step son: Hollis Wilson and family of the Greenville, SC area; and a step daughter: Karen Ellsworth Todd and family of the Centennial, CO area.

She was predeceased by her second husband: Robert Ellsworth; and four siblings: Elva Waterfield, and Raymond, Walter, and Leroy Williams.

A family service will be held in September in her beloved home area of Wash Woods, NC.

In lieu of flowers, donations can be made to the Winnicott Foundation in the United Kingdom. The Winnicott Foundation helps to support care for premature and critically ill newborn babies and their families and supports the NICU where Fay’s first great grandchild, Michael Patrick Ruddy was born prematurely on December 13, 2018 but grants us today with healthy happy joy.

Cards may be sent directly to the family at:  20 Wheeler Lane, Lyndonville, VT 05851

Donations can be made and condolences may be shared with the family at www.guibordfh.com

To order memorial trees or send flowers to the family in memory of Dona Ellsworth, please visit our flower store.