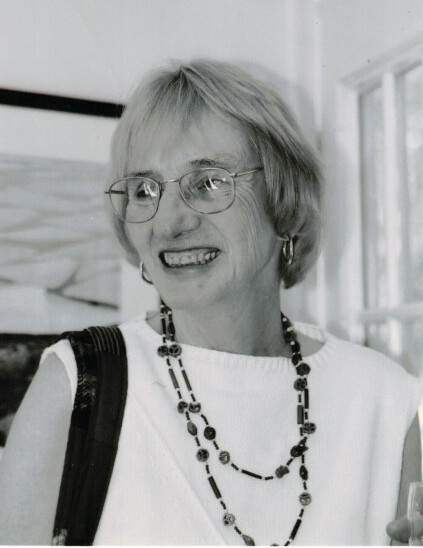 Ellen (Donovan) Searls died peacefully on January 18th, 2022 in Saint Johnsbury, Vermont. She was born on November 12, 1937 and raised in Arlington, Massachusetts, the oldest of four children of Kathleen (McKenna) and Joseph Donovan. She received a Bachelors of Science in Chemistry from Simmons College in Boston, Massachusetts and worked in a laboratory at Brandeis University where she met her husband Robert (Bob) Searls.  Ellen and Bob were married in 1961 and remained married for 55 years until Bob’s death in 2017.

They moved to Charlottesville, Virginia in 1963, when Bob accepted a faculty position at the University of Virginia. They moved to Abington, Pennsylvania in 1968. Ellen was a preschool teacher at Abington Presbyterian Church before obtaining her M. Ed in Special Education and a Ph.D. in Educational Psychology from Temple University. She worked as a college professor at several Philadelphia colleges, teaching early childhood education. One of her most rewarding positions was training teachers for the Head Start program in Philadelphia.

Ellen and Bob retired to Charlottesville, Virginia in 1966. Ellen actively pursued many interests, including volunteering at a health clinic, performing with local choirs, being a member/chair of the quilt guild and taking religion courses at the University of Virginia. Ellen was an active member in the Quaker meetings in Abington PA, Charlottesville VA and Plainfield VT. She lived in Danville VT during the last four and a half years of her life.

Ellen was predeceased by her brother Tim Donovan and sister Mary Harrold. She is survived by her brother Michael Donovan and her four children and three daughter in-laws: sons Tim Searls and Grace Garland of Portland, Maine, David Searls and Julie Kirrane of Belmont, Massachusetts, Paul and Andrea Searls of Danville, Vermont, and daughter Anne Searls and Tom Carrigan of Pennsylvania. She also leaves behind six grandchildren: Owen, Ned, Lila, Timothy, Peter and Elizabeth Searls.

To order memorial trees or send flowers to the family in memory of Ellen Searls, PhD, please visit our flower store.