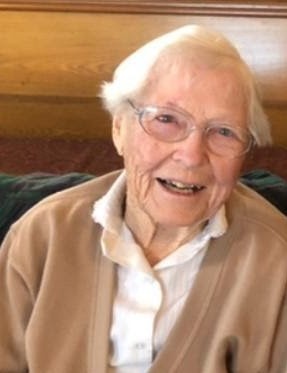 Esther Merriam Gray died on April 28, 2021, at the home of her daughter Kathy.

Esther was born on July 26, 1923, in Lyndon, VT, the ninth child of Luther and Helen Rich Merriam.  She attended Lyndon Institute, Northampton Commercial College (MA), Dover Junior College (DE), and graduated from Scarritt Methodist College in Nashville, TE, with a degree in Christian Education.  She married Lyndon native and West Point graduate Clifton W. Gray in 1946.  When he was posted to Japan, she found a way to join him in 1949 through the World Council of Churches. The couple divorced in 1970.  Esther raised three children, started a nursery school, worked as a newspaper typesetter, was program director for the Girl Scouts. After formal retirement, she served 2 years in the Peace Corps teaching in Micronesia. After the Peace Corps, Esther returned to Lyndon, built her home on Diamond Hill and worked at the St. Johnsbury Athenaeum and Cobleigh Libraries.  She lived at the Darling Inn in Lyndonville, where she loved walking around bandstand park and keeping the trash picked up.  She then was a resident of Canterbury Inn in St. Johnsbury.  She attended the Lyndonville United Methodist Church both as a child and in the last decades of her life.

Esther was known for her love of singing, hiking and snowshoeing, leaving every place better than she found it, and having a positive attitude.  Whenever the opportunity and a partner were available, such as monthly music at the Darling Inn Senior Mealsite, Esther could not be kept from dancing.

Due to current capacity restrictions, the memorial service for Esther will be livestreamed on the Lyndonville UMC Facebook page @LyndonvilleUMC on May 14, 2021 at 11am.

The family would like to thank the staffs from Canterbury Inn and Home Health and Hospice for their loving care.

To order memorial trees or send flowers to the family in memory of Esther Gray, please visit our flower store.