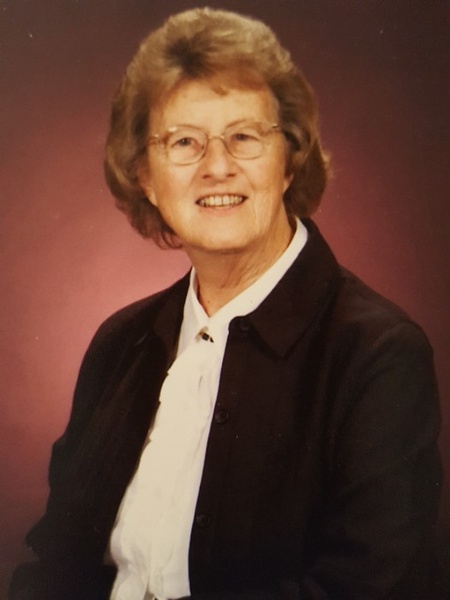 The family of Ethelyn Mae “Carr” Calkins announce the departure of their mother on August 28,
2019 at the Atkinson House in Newbury, VT. Better known as “Betty,” she passed in peace with
her sons at her side at the age of 96 and lived a full life, primarily in Danville.

Betty was born June 22, 1923, at the farm in Danville (also the former home of Thaddeus Stevens),
with her twin sister arriving before the stroke of midnight, to Harry & Clarissa “White” Carr.

She grew up on a 432-acre farm, working and studying by lantern, up early in the morning with
chores as, like many, they raised all their own food. The family survived the “Depression of 1933”
and she attended the “Center School” from grades 1-8, a one room, single teacher school without
electricity and running water, but with a pot-bellied stove and a double out-house. They walked to
school, often taking the short cut along the St J. & L.C. rails or rode their horse “Lottie.” Her
mother warned her about the railroad, especially to run if they saw any tramps, but they never did!
She recalled having “corn husking bees” with the neighboring farmers and if you got a “red ear” you
were allowed to kiss a special person. The family moved into “town” in 1936 and she attended
Danville High School where she was a center on the girls’ basketball team and captain her senior
year, graduating in 1941 with a focus on “business classes.” She then went to work for the former
Caledonia National Bank and married Roy A. Calkins on January 1944 in Tucson, AZ.

After WW II, she began raising a family of four boys, first on Railroad Street with the trains
rumbling through Danville prompting the hound dogs to howl behind the house when the whistles
blew. In the early 1960’s, they moved to the “Dole” farmhouse in the center of the village. In the
70’s and 80’s, she worked at the Danville School District and as an assistant Town Clerk, later
volunteering at the local school and Open-Door food shelf.

She loved her grandchildren and enjoyed attending their school functions and sporting events,
driving Garren & Karen’s children around and having them visit her modest apartment for snacks
and company. She enjoyed family thanksgivings with her large, extended family. Her “pink stuff”
was a legendary dish, a unique jello salad that no one has been able to replicate. The maple baked
beans, “real” chocolate pie and doughnuts were signature items from Betty’s kitchen. During later
years, she enjoyed walking with longtime friend Gail Calkins, picking berries, traveling to Orono,
ME to visit her brother Ed and sister-in-law Betty, and getting together with friends (Fuzz, Janet,
Francis, Dot, Joanna and Marylene) at the Danville Inn.

She was an active member of the Danville Congregational Church and served faithfully in many
roles as a Sunday School teacher, Superintendent, Deacon, member of the Church Ecumenical
Open-Door Committee, and a long-time member (50+ yrs.) of the Christian Services Committee
(refreshments group) where her specialties were egg salad and cream cheese and cherry sandwiches.

She was predeceased by her parents, twin sister Evelyn, brother Edward and former husband Roy.
She is survived by sons Darryl Calkins and late wife (Sherry) of Hartland, VT and their children
Kristin, Byron and Karianne; Craig and partner Louise and his children Abby and Bradley, Dana &
Dawn Calkins of Danville and their children April, Travis, Derick and Dustin, and Garren & Lisa
and his children, Lyndsay, Garrett, Mikayla, Logan and Bianca. Betty leaves behind 14 great
grandchildren. The Calkins family thanks the Atkinson House and VNA staff for their excellent
care and support.

The funeral service is scheduled for Sunday, 2 PM, September 8, 2019, at the Danville
Congregational Church, the Rev. Douglas Carter officiating. To leave a message at the
Sayles Funeral Home visit www.guibordfh.com.

To order memorial trees or send flowers to the family in memory of Ethelyn 'Betty' Calkins, please visit our flower store.