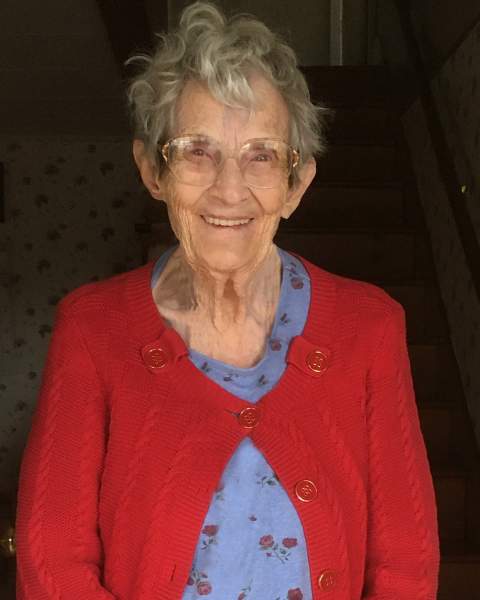 Frances Ladd of Danville, VT passed away at the age of 97 at her home in Danville, VT on Saturday, November 12, 2022.

Frances never forgot her sister, who had been 7 years older and died as a child. Frances thought that was the reason why her parents had been so protective of her.

Just after WWII ended, Frances, (21) began working for the telephone company in Danville. Those were the days of the crank phone. Frances knew everyone in town, so when Doctor Paulson would call and say, ‘We’re going out, would you take my calls, please?’ Frances was happy to oblige.

A couple years later, she met Gordon Austin Ladd, who changed her life. He worked for Howard Calkins Construction Company as a crane operator. They married in Oct 1948, bought a house on Hill Street in Danville and resided there for the rest of their lives. They had four children, Linda Jean, Brenda Sue, Brian Elwin and William Harvey.

She was an active member of The Danville Congregational Church and she was part of the women’s auxiliary. She participated in the annual Christmas Bazaar.

For 20 years, Frances worked in the cafeteria of Danville School. She made homemade bread and was known as the ‘Lunch Lady’. Throughout her life, she was known for her delicious rolls, chocolate chip cookies and jam filled cookies that she so graciously shared with so many. She also knit mittens for an innumerable number of children, her own children and grandchildren, until she had to stop in later years due to her arthritis.

After her retirement, she became a volunteer at the ‘Open Door’ Thrift Shop on Hill Street for 25 years.

She was predeceased by her husband, Gordon and daughter, Brenda.

She leaves behind a legacy of Yankee perseverance and love to: her daughter, Linda Ladd and wife, Lore of Sarasota, Florida; Roy Patterson of North Danville, Brian Ladd of Danville, Bill and Tammy Ladd of Fayetteville, NC; 13 grandchildren, 22 great-grandchildren and 3 great-great-grandchildren who are dispersed all over the United States.

After 22 years of living void of her beloved husband, ‘Duffy’, Francis Ladd has joined her one true love in life.

A family graveside service will be held.

To order memorial trees or send flowers to the family in memory of Frances Ladd, please visit our flower store.