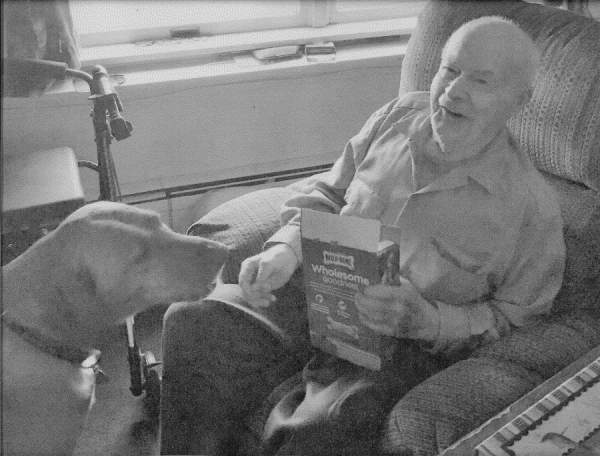 Gerald H Barrows Jr of Lyndonville died January 13 at the age of 94,with his loving friend Jeannie at his side.  Gerry was a husband and father first and foremost. He lovingly nurtured, cared for and nursed his wife Dorothy and children Harold and Lori through their illnesses and deaths and while he was a trucker by trade,  he missed his calling because he was an amazing nurse.

Truly a member of the greatest generation he was a survivor.  He was hard working, tough and had a soft core.

He loved animals of any kind and carried bacon in his pocket for his dog friends.... who would jump for joy when they saw him coming. Gerry’s most recent fur love was Luke, who knew there would be bacon and exactly where to find Gerry whenever he went where Gerry could be found.

Gerry was truly the “Lord “ of The Pines where he lived his later years. A friend to all,  he was loved there by too many to mention  and he returned that love with all he had in him. He shared a deep friendship with all of the staff and residents but had a special connection with his friend Richard.

Gerry perfected the art of “dirty old man “ and took great pride in being called one. Anyone who crossed his path would be treated to one of his jokes and he had hundreds of them. He would say anything for the pleasure of a blush and laugh wholeheartedly if he accomplished it!

A celebration of his life will be held at a future date. Donations in Gerry’s name can be directed to The Pines Activities ,601 Red Village Road, Lyndonville 05851

To order memorial trees or send flowers to the family in memory of Gerald Barrows Jr., please visit our flower store.