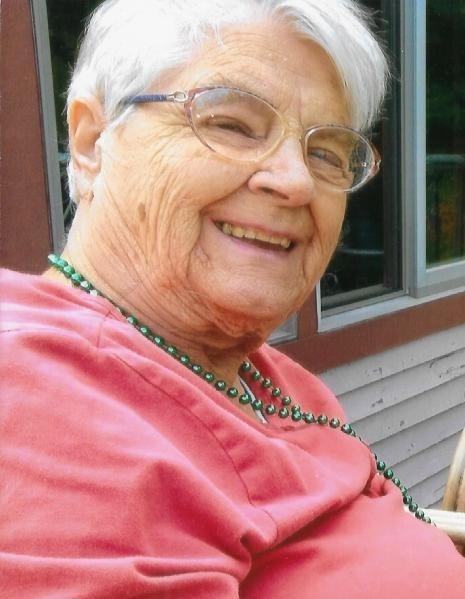 Sadly, we share the passing of our mother, grandmother, great-great grandmother and friend after a year of declining health due to (community acquired pneumonia).

She was born October 15, 1919 in Peabody, MA to George E. Webber and Millicent (Cotton) Webber.  Harriet was the youngest of three children and grew up in Vassalboro, Maine and received her elementary education there.  She then attended and graduated from Coburn Classical Institute in Waterville, Maine with the class of 1939 and music was her focus.  While attending Coburn Classical she became very active in Glee Club and Girls Club.  In that day, boys were boarding students and girls were day students.

Harriet grew up on a small farm together with her sister Priscilla and her brother Daniel, always enjoying riding horseback.  From Maine she came to live in Peacham, VT and from there and through friends met and married Horace Smith on November 1, 1941.  Together they raised three sons, Linwood (Maria), Duane (Evelyn) and Lawrence (Kimberly).

Harriett worked at Randall & Whitcomb in St. Johnsbury for 16 years, followed by years at Capital Stationers until retirement.  She also drove school-bus in rural St. J. Center for 15 years, transporting children to and from Center Village School on Sanger Circle.

Harriett is survived by all three sons, six grand-children, eight great-grandchildren and great-great grandchildren, along with two nieces, Anne of Florida, Rebecca of NH and two nephews Daniel Webber of NH and Philip Pollard of Arlington, MA.  She was predeceased by her Horace in 1995, her sister Priscilla, her brother Daniel, her nephew George Leavitt, her daughter-in-law Vera Smith, and her dear school-mate, and lifelong friend, Lea Perry of North Vassalboro, Maine.

Her greatest passion was a game of cribbage, always ready to play.

Harriett leaves many dear friends.  She has been loved by all who knew her and shall be long remembered for her endless generosity and loving heart, along with her helping hands.

Should people choose, donations may be given in her memory to Alzheimer’s Association Vermont Chapter, 300 Corner Stone Drive, Suite 130 Williston, VT 05495.

Services will be held on October 15, 2019 at 11:00AM at the Guibord-Pearsons Funeral Home located on 15 Main Street, Lyndonville, VT.

Burial shall be private and at the convenience of the family.

To order memorial trees or send flowers to the family in memory of Harriett Smith, please visit our flower store.