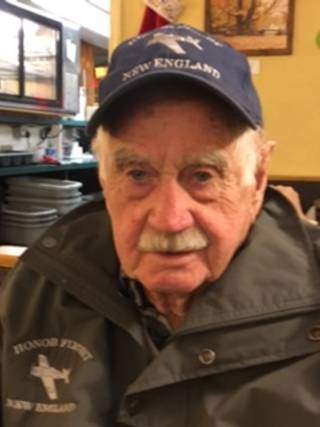 North Danville, VT: Hazen Edwin Spaulding, age 95, of Jamieson Road, passed away into the presence of his Lord and Savior, Jesus Christ on November 13, 2020.

Hazen was born in Sherburne, VT, now Killington, on March 28, 1925, son to the late Merald Horton and Mae (Spurr) Spaulding.   He grew up in Sherburne and graduated from Rutland High School in the Class of 1943.  He joined the U.S. Navy immediately after and served as a Seabee in the Pacific Theater on the island of Attu in the Alaskan Archipelago.  Upon his repatriation in 1945, Hazie married Pricilla Anne (Stannard); she passed in 1948. They had one child together.  He had already begun his 45 year career with Central Vermont Public Service (CV), working as a lineman.  The position required him to relocate a few times over the years, but much of that time was spent in Mendon, VT where he was the safety director for CV.  He remarried in 1950 to Dorothy Sarah (Lea) and his family continued to grow.  They spent a great deal of time at the family camp on Newark Pond and were long time devoted members of the Christ Community Alliance Church in Orange, VT.  He enjoyed hunting and fishing throughout his life.  In 1980 he moved to North Danville and spent the last part of his career working as the district manager for CV in St. Johnsbury.

Hazen is survived by his daughter, Susan Spaulding and her partner, Carolyn Parker Haas, of Rockingham, VT, his son: Jeffrey Spaulding and wife, Joan, of Chittenden, VT, and daughter: Laurie Spaulding, of Newark, VT. Hazen had 5 grandchildren and 5 great grandchildren.

In addition to Pricilla, he was predeceased by his wife of 57 years, Dorothy, in 2008, and his brother, Alden Spaulding.

A private burial service will take place at the Sawyer Cemetery in Bradford.

There will be no Calling Hours at this time.

To order memorial trees or send flowers to the family in memory of Hazen Spaulding, please visit our flower store.