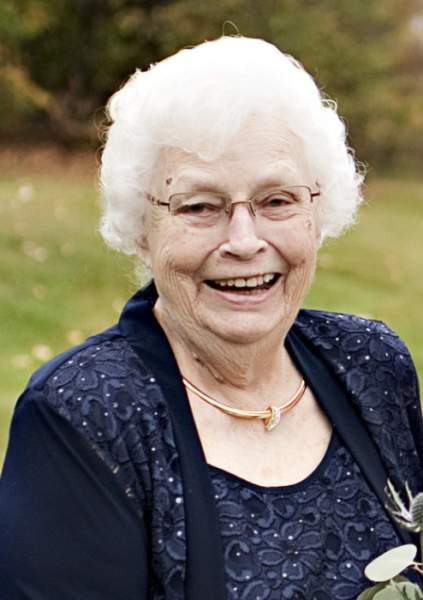 Helen Lahr Smith, beloved mother and grandmother, passed away on September 14, 2019, in

NJ, she was the second of five children. Helen graduated from Abraham Clark High School in

Roselle, NJ in 1937 and Washington School for Secretaries in 1939. She worked for Prudential

Insurance in Newark, NJ and later, AT&T in New York City. She was married to Charles Arthur

“Art” Lahr from 1943 until his passing in 1981. Together, they raised two daughters, Suzanne

2001 Helen married Edwin Smith, and they shared two years of marriage prior to Ed’s passing

in 2003. Helen remained in Peacham until her 100th birthday.

An avid reader, knitter and cross stitcher, Helen enjoyed spending time with her family and

friends drinking coffee, doing puzzles, playing bridge and golfing. Throughout her life she was a

square dancer, bowler, an active member of both the Liberty Corner Presbyterian Church and

the Peacham Congregational Church serving as a member of the choir, diaconate and

fellowship committees. Helen was a founding member of the Peacham Investment Group.

Selfless, kind and humble, Helen was always caring for others, not only through her

contributions to her community, but also through her loving personality. Her genuine warmth,

infectious smile, and lively spirit will be greatly missed by her family and friends.

Helen was preceded in death by her brother John Meier and her sister Charlotte Riker; and is

survived by sisters Alice Roberts and Wilma Vachel, her daughters Suzanne Alexander and

husband Craig, and Carolyn Deasy and husband Chip, and her four grandchildren: Ashley

A special thank you is extended for the kindness, care and help provided by Caledonia Home

Health Care and Hospice, and the staff at the Canterbury Inn in St. Johnsbury, VT.

In lieu of flowers, donations in memory of Helen may be made to the Peacham Congregational

To order memorial trees or send flowers to the family in memory of Helen Smith, please visit our flower store.