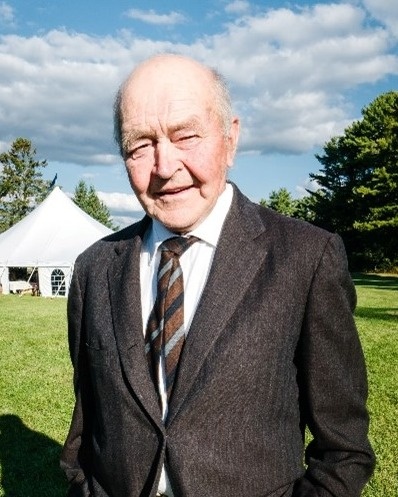 Hezzie Bailey Somers of Barnet, VT went to be with his Lord and Savior Jesus Christ, at Northeastern Vermont Regional Hospital, on September 23, 2022 following a brief illness.

Mr. Somers was born in St. Johnsbury, VT on August 10, 1936, to John and N. Gladys (Livingston) Somers.  He was educated at the Peacham Academy and at the Randolph School of Agriculture.  He married Marion (Tuzo) Somers on October 11, 1958.  They enjoyed over 60 years of marriage until her passing in 2019.

Hezzie was a lifetime third generation Jersey dairy farmer, and also owned and operated a large Pick your own strawberry operation at his farm in West Barnet.  He was well known in the surrounding communities and in Vermont Agriculture for his pioneering work in the strawberry industry.  Hezzie was involved in various farm organizations including the Vermont Farm Bureau and the Vermont Fruit and Vegetable Growers Assoc.  He was especially known for his poetry and story recitations at these events.

Hezzie was a longtime member of the Union Baptist Church of Waterford, VT and while there participated in foreign mission trips to both Honduras and Peru.  He was also involved in the Covered Bridge Ministry of St. Johnsbury, VT as well as Celebrate Recovery.

He was also a member of the West Barnet Grange, and loved attending the West Barnet Senior Meal site.  He enjoyed playing cribbage, and catching up with friends at the Grange breakfast.

A memorial service will be held at a later date.

To order memorial trees or send flowers to the family in memory of Hezzie Somers, please visit our flower store.