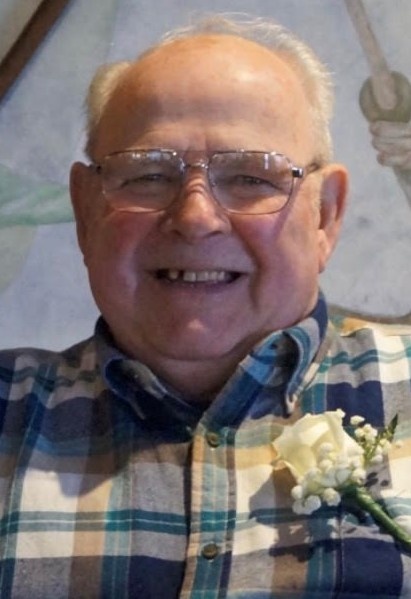 Jim was born in Barnet, VT, on September 13, 1938, the son to the late Florien Andrew and Josephine Rosemary (Littlehale) Cote.  He grew up in Barnet and graduated from the St. Johnsbury Trade School with the Class of 1956.  The following year he joined the U.S. Air Force where her worked on jet engines. On May 2, 1959, Jim married the former Barbara June Corliss and made their home in St. Johnsbury before moving to Danville in 1963. For a time after the Air Force he boxed in the Golden Gloves,  was an avid outdoorsman enjoying hunting, snowmobiling, motorcycle riding (his first bike was a true Hog – a’74 FLH), and he continued to ride throughout his life.  He owned and operated Cote’s Heating Service and truly enjoyed his work, probably because of all the people he encountered.  He could talk with anyone and carry on a conversation with a stranger at length.  Play time would take him to Northeast Speedway where he raced stockcar for a number of years; casino trips were a frequent occasion, as well as a few to Las Vegas with Barbara.  They would be gone for a month at a time and hit major points across the United States.  He loved to take her dancing and people would clear the dance floor to watch them jitterbug as well as dance to a wide variety of music. Jim enjoyed building and practically rebuilt his home over the years, and he was also a huge fan of the Duke, John Wayne.

Spending time with his family was at the top of his list.  He was a great Dad, and one couldn’t ask for anything more.

Survivors include his beloved wife of over 61 years, Barbara J. Cote of Danville; his daughter, Sherry Blouin and husband, Peter, of Kirby; his son, Ricky Cote and wife, Sylvia, of St. Johnsbury; brother, Donald Cote and his girlfriend, Dee, of St. Johnsbury; two grandchildren, Raymond Richards and fiancée, Michelle Fox with their children: Tucker, Patrick & Ashley, and Felicia Bedor and husband, Ben, with their children: Carter & Hudson as well as many nieces and nephews

He was predeceased by his brothers, Leo, Gerry, and Sonny Cote.

A Mass of Christian Burial will be celebrated at the Queen of Peace Catholic Church in Danville at 11AM Wednesday, October 28, 2020, with Fr. Karl Hahr as celebrant.  Burial will immediately follow at the Danville Green Cemetery.

Friends may call on the family from 5-7PM Tuesday the 27th at the Sayles Funeral Home, 525 Summer Street in St. Johnsbury.  Please be considerate of social distancing and masking at all locations.

Memorial Donations may be made in James’ name to a humane society of one’s choice.

To order memorial trees or send flowers to the family in memory of James Cote, please visit our flower store.