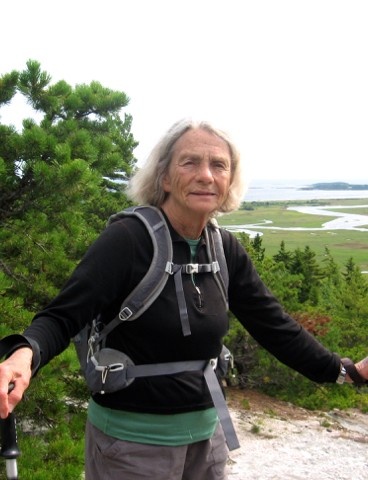 Jean Crossley Haigh (formerly Rogers and Cotroneo), 84, of South Albany Road in Craftsbury, VT, passed away unexpectedly but peacefully while leading a hike with her good friends from the Northeast Kingdome Section of the Green Mountain Club.  She was doing what she loved most in her favorite part of the state, right up until the last moment.

Born on March 21, 1935, to Ernest and Etta (Morris) Haigh, Jean grew up in Rutland, VT, where she developed a love for Morgan horses at Mr. Hendy’s barn and for skiing at Pico.  Graduating from Rutland High School, she studied microbiology at the University of Edinburgh in Scotland, the rugged home of her ancestors.  After returning to the States, she married and had two daughters, Nancy and Jackie, and, in 1965, resettled in Sudbury, VT, on an old farm, which she quickly filled with Morgan horses and a pony.  She rekindled her love of skiing at High Pond Ski Area.  Jean completed her B.S. and Masters in Education at Castleton State College.  Later, she moved to Craftsbury, VT.

Over a long, vigorous, and valued career, Jean enriched a variety of educational institutions, serving as a fifth-grade teacher at Lothrop Elementary School; an administrator at the Brandon Training School, where she assisted in the deinstitutionalization and closure of the facility; as Special Education Director at Rutland Northeast Supervisory Union and Lamoille South Supervisory Union; and as Adjunct Professor at Castleton and Johnson State Colleges. At the time of her death, she was still working for UVM, consulting to schools on the implementation of Positive Behavioral Intervention Support programs. As an educator and a teacher of teachers, Jean transformed innumerable lives.

Jean’s unbounded energy, her commitment and dedication, her kindness and generosity, her compassion and care, and the brilliance and clarity of the light she brought to everything provided an example and an inspiration not only to all the young lives she touched and transformed, but to all the teachers she mentored and guided and who continue to spread her invaluable influence. To be anywhere with Jean in public was to be routinely astonished that she always seemed to know—and remember—everyone, and everyone loved her. The stream of people who stopped to say hello and chat, to be remembered, and to draw energy and warmth from Jean’s limitless stores was a constant revelation of what she meant to so many.

Outside of her work, Jean was a tireless and passionate member of the Green Mountain Club, where she served as a Board Member, a former President, a founding member of the NEK Section, and a regular hike leader literally until her last day.  One of her proudest achievements was the opening of the Kingdom Heritage Trail earlier this year, a project she worked on for twenty years.  She also helped to found the Friends of Willoughby State Forest, a private, non-profit committed to preserving the pristine nature and encouraging the responsible use of the Willoughby State Forest.  Jean truly loved the outdoors; in addition to hiking, climbing, skiing, and snowshoeing in VT, she loved spending time in Scotland and the Alps.  Here too Jean’s energy and example fostered and inspired so many others to go out and explore the world around them.

She was predeceased by her parents, Ernest and Etta Haigh, and by a brother, Douglas Haigh.

Those wishing to honor Jean’s memory may do so by making charitable contributions to the Green Mountain Club and the Friends of Willoughby State Forest.

A Celebration of Jean’s life will be held in Waterbury Center on December 7th, from 12n until 2pm at the Zenbarn with a gathering later at the Green Mountain Club Headquarters from 2pm until 4pm. Parking is limited so please car pool.

To order memorial trees or send flowers to the family in memory of Jean Haigh, please visit our flower store.