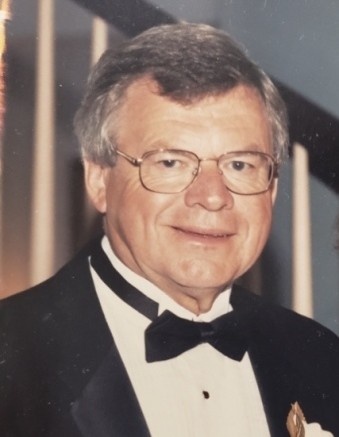 After a long battle with Alzheimer’s disease, John Paul Garey passed away with his loving family by his side.

John had a tremendous work ethic and truly believed that success and good things came from a day well spent working and giving your best. John worked for Peat, Marwick, Mitchell and Company and the Connecticut Bank and Trust in Hartford Connecticut until moving back to St. Johnsbury in 1974. John proudly worked for EHV and WICOR from 1974 until his retirement in 2002. John loved his EHV family and could be found often visiting on the factory floor or hitting golf balls on the EHV lawn.
John was a true believer in service and belonged to many community organizations. He was a member of Kiwanis, Rotary and St. Johnsbury Chamber of Commerce. John also served on the board at the Howard Bank, St. Johnsbury Athenaeum, St. Johnsbury Recreation Department, NVDA, and was a Trustee Emeritus at St. Johnsbury Academy. Being a “softy at heart”, John was most proud of being a Justice of the Peace and being part of so many celebrations of love.
As much as John loved to work, he also loved to play. On any given day, John could be found on the golf course, or more likely in the woods looking for his golf ball. He was also an avid skier and was often seen cruising down the slopes of Burke Mt. in his Lotus- Duvet onesie. John also loved spending time with his friends on his boat at Joe’s Pond. One of his favorite pastimes was pretending to hunt with the Browns Pond Sportsman’s club; a group of friends that he truly cherished.

John was married to Linda {Barnett} Garey and they were blessed to have five wonderful children. Rick Garey, his children, Samantha and Sean, and life partner Amy Rose. Mary Lynn Garey and children Patrick, Christian, Noah, and Juliaunna. Lisa and husband Mark Avery, children Bodie and Ty. Kelly and husband Stephen Loosigian, children Avery, Daniel, and Roffee. Sarah Garey and husband Michael Wright, and children Colby and Lily. John is also survived by his sister-in-law Cynthia and husband Barry Waldner and their children Zachary, Josh and Chelsea. He is also survived by his life long friend Ernie Thurston.

In lieu of flowers please consider making a donation to St. Johnsbury Academy P.O box 906 St. Johnsbury Vermont 05819, a place he loved and was so proud to be of service to. Later in the summer, the family plans to hold a celebration of John’s life.

To order memorial trees or send flowers to the family in memory of John Garey, please visit our flower store.