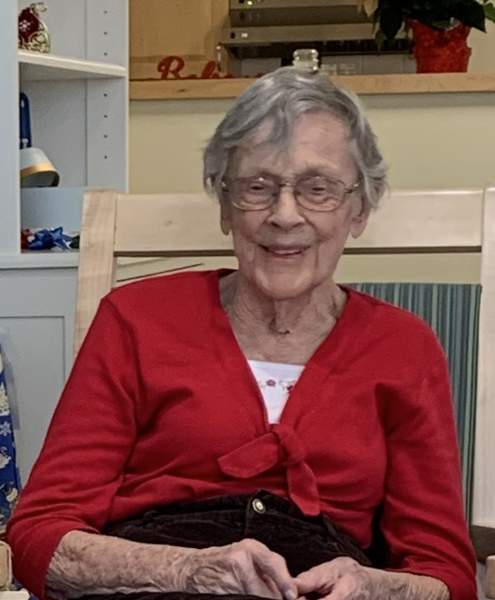 Lesley Alison Conte, born 5/8/33, died 12/6/21 at the age of 88, in Bradford, Vermont.  Alison was born in Scotland to Leslie and Jessie McLees.  She graduated as an RN from St. George’s Hospital School of Nursing and pursued a nursing career in London.  She left England to visit her sister in the Rhinebeck, New York and stayed.  She became a US citizen in 1961 and settled in the Hudson, New York area. Her family from England was always welcome in her home and she made many trips to England over the years.

On June 8, 1975, Alison was welcomed into the large Conte family upon her marriage to Tom Conte, Sr.  At the same time, she became step-mother to Tom Conte and Sherene Tiano.

Alison became office nurse for Joseph P. Gold, MD, and worked for him for 25 years.  Any time she was out and about in Hudson, she always ran into people who remembered her from Dr. Gold’s office.  After Dr. Gold died, she began babysitting in her home for two sisters, Erin and Abby.  After they started school, she babysat for another set of sisters, Nina and Amanda.  The girls were very special to her and became part of her family.

She was active in the Elks Ladies Auxiliary, serving as member and President.

Alison is survived by her step-children Tom and Sherene; five grandchildren: Shawn, Katy and Nate Conte and Joe and Jonathan Tiano.  She is also survived by four honorary granddaughters; Nina Benevenuto, Amanda Brady, Erin (Goldman) Cooke, and Abby Goldman.  She leaves a sister Kate (McLees) Force and a brother John McLees, and an extended family in England.

She was predeceased by her husband, Tom Conte, Sr., her sister Molly and brother James.

A memorial service will be held at Cedar Park cemetery in Hudson, New York on Friday, July 29, at 11:00 am.  A luncheon gathering will be held after at the Hudson Elks Club from 12:00 – 2:00.  All are invited to come and meet with family and share memories. At Alison’s request, please make a donation in her memory to your charity of choice.

Sayles Funeral Home is assisting the family with arrangements.

To order memorial trees or send flowers to the family in memory of Lesley Alison Conte, please visit our flower store.