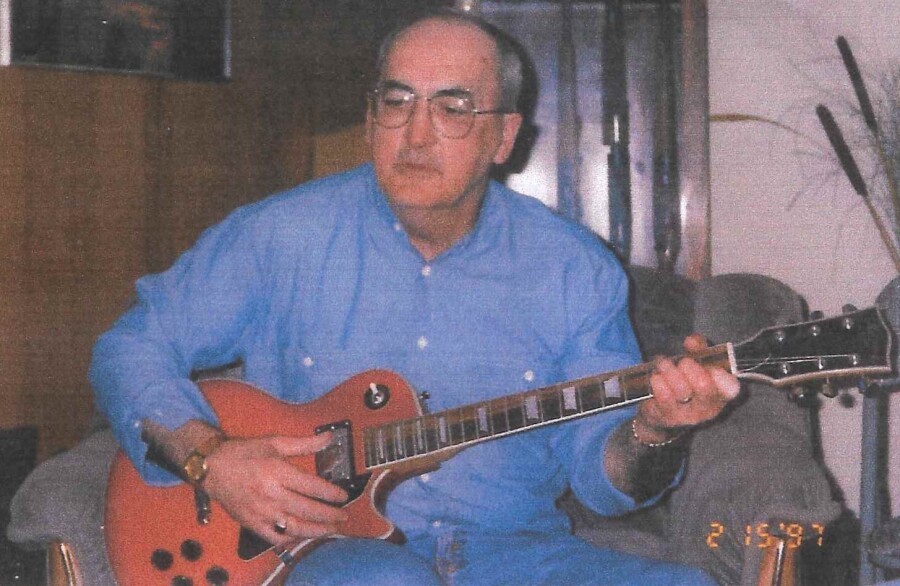 Leslie M. Carpenter, Jr., (Moe) passed from this life to a better place on January 4, 2021 at The Pines Health and Rehab in Lyndonville, VT, after struggling for years with dementia.

He was born, one of eight children, to Leslie Carpenter, Sr. and Pearl Rash Carpenter in Concord, Vt., on February 17, 1932. His parents and all of his siblings predeceased him. Brothers; John, Donald, Roger, Francis (Bud) and Richard; Sisters, Ruth Martin and Nancy Briggs. Moe attended school in Concord before enlisting in the Air Force Military Police stationed in El Paso, Texas. He married Evelyn (Tootie) Silver (Coakley), his high school sweetheart and 5 sons were born to this marriage. Randall (Randy) predeceased his dad in 2011. 4 sons survive, Robin (Kathy), Timothy (Gail), Eric (Stacey), and Tracy (Gary) along with daughter-in-law Nancy (Richard) Bean. Moe and Tootie's marriage ended in divorce but the two remained friends until she passed away.

Two years after the divorce from Tootie, he met Virginia Brown, whose husband had died and left her with six children. Moe married Ginny, and became step dad to her children, Now there were 11 pre and young teenagers in the family, and one can only imagine the challenges this presented. But you would have to know Moe with his love for children, to understand he took this all in stride. In Concord, he was Cub Scout and Boy Scout Leader, helped create a skating rink, and together with Ralph Keach, built a rope tow on the hill above High Street, so the local children could enjoy skiing. He loved basketball games and attended as frequently as possible. Unfortunately, the marriage to Ginny was dissolved after 10 years.

Sometime later, he married Bonnie Thurston and became step-dad to Vicki (Vince) O'Leary, Bill Thurston (Nancy Brown), and Tammy Thurston Brown (deceased). Bonnie passed away suddenly in 2010 after 29 years of a happy marriage. They enjoyed camping, dancing at the Moose Club along with best friends, Milt and Rena Percy, and fixing up their home on School Street.

Subsequent to Bonnie's passing Moe's son, Randy and wife Nancy, introduced their dad to his current wife, Edna Carpenter. Moe was once again Step-dad to her children, Brian (Linda) Blakslee and Lori (Bob) Mann. As one might imagine, Moe was grandpa to many, many grandchildren and great grandchildren. He loved them all and he and Edna liked to entertain a whole household of people on holidays, and simply for a cabin-fever-reliever in February each year. There was a special jam session at their home where Moe was joined by friends and their wives that included Milt Percy, Ronnie Noyes, Glen Gadapee, and Steve Gadapee, for guitar playing, singing, and a huge spaghetti dinner afterwards. The camp in summer was active with combined families and friends for pontoon boat rides, kayaking, cook outs, bonfires, fireworks, with food galore (and probably a drink or two). Wonderful memories, never to be forgotten.

His military experience served him well after an honorable discharge when he returned home to serve as constable and mediator for Concord and its town people. He worked as Manager of Noyes Tire Company for many years and also worked for Vinton Motors. After retirement, he kept busy as maintenance supervisor for East Point Properties, Lyndon Institute, and drove cars for St. J Auto, and enjoyed camping with family and friends. He was well known at campgrounds as the entertainer with his beautiful voice and guitar playing talents, along with son, Randy. They had a captive audience wherever they went.

In later years, he and wife, Edna, purchased a camper and enjoyed wonderful times with friends and family at Shadow Lake in Concord. Peaceful hours spent in his pontoon boat and kayaking on the lake were precious to Moe as he began to slowly slip into dementia.

There will be a graveside service on July 24, 2021 at 11AM at the Concord Village Cemetery with military honors, officiating will be John Sleeper.  All are welcome to attend.  Guibord-Pearsons Funeral Home in Lyndonville, Vt is in charge of arrangements.

To order memorial trees or send flowers to the family in memory of Leslie Carpenter, Jr., please visit our flower store.