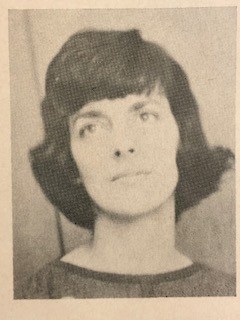 Margaret “Peggy” Ann (Minehan) Ryan of St. Johnsbury passed away into eternity on March 8, 2020 following a long decline with dementia. Peggy was born on June 23, 1931 in Ayer, Massachusetts to the late Richard and Helen Minehan. She grew up in a Catholic family of seven children (five daughters and two sons) in West Groton, Mass. Long interested in books and dramatics, Peggy acted in high school drama productions and played on the girls’ basketball team at the former Groton (Mass.) High School, graduating from that school in spring 1949. She entered Emerson College that fall and studied English and dramatic arts during her years in Boston until her college graduation in spring 1953. After working for a year in advertising at Sears, Roebuck & Co. in Boston, Peggy was hired at St. Johnsbury Academy in 1954 to serve as an English teacher and theater arts instructor. At the Academy, she met the love of her life, fellow SJA teacher and athletic coach, Francis X. “Frank” Ryan. Frank and Peggy Ryan were parents of five sons: Damian Mark, Christopher, Anthony (deceased), Jonathan, and James (“Jamie”) and made their home of many years at 7 Boynton Avenue in St. Johnsbury. The Ryan family members were parishioners at St. Aloysius (later St. John the Evangelist) Catholic Church. Peggy later served as a study hall proctor at the Academy during the 1960s and as the SJA theater arts director from 1973 to 1980. She subsequently taught English in private and public schools in New England and in Virginia. Locally, Peggy acted in theater productions in the early to mid 1970s with the Darion Inn Players and she was a member of College Club and Great Books.

A graveside service will take place on Saturday, June 18, 2022 at 11am at Mt. Calvary Cemetery in St. Johnsbury, Vt.

To order memorial trees or send flowers to the family in memory of Margaret 'Peggy' Ryan, please visit our flower store.