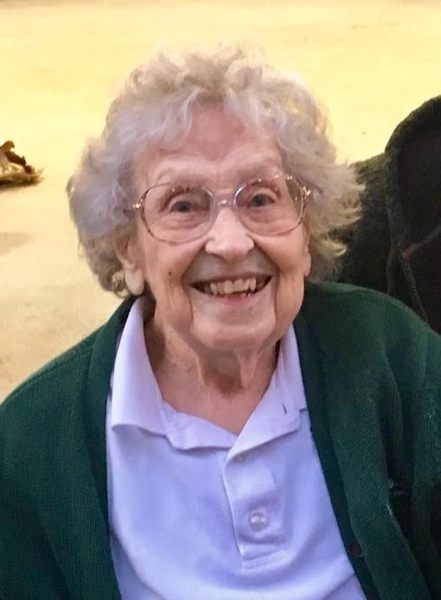 Marjorie E. Brown, 95, a long-time resident of Duke Street, St. Johnsbury, VT died peacefully on July 16th at the Pines Health & Rehabilitation Center in Lyndon where she resided for the last year and a half. Marge was one of seven children born to Florence Emogene (Eastman) and William George Tucker in Barre, VT.  She attended elementary schools there and graduated from Spaulding High School in 1942.  She sang, played piano & saxophone and participated in the All-State Music Festival and Barre Junior Symphony while a student. She served as organist at Barre’s First Baptist Church and at Bethel's Universalist Church.  She worked as a secretary at Beck & Beck granite company, and played sax with Barbieri’s Swing Band.  On 14 June 1947 she married Thelbert Dean Brown and lived at his Bethel VT family farm homestead. She acquired an electronic Solovox to add to her piano playing at local dances. They lived in Barre, Woodbury and Northfield before purchasing their St. Johnsbury home in 1957.  She became a member of the Union Baptist Church. She was secretary & bookkeeper for T.D. Brown Inc, Brown’s Texaco, Brown’s Taxi & Courier Service and was proprietor of Brown’s Music.  She gave beginner music lessons to her children and to many students, especially in piano and guitar.  She was the pianist for the St. J. Trade School Glee Club for their last 6 years. Occasionally she was organist at Union Baptist Church. Marge joined the St. Johnsbury Band in 1984, later added Lyndonville Military Band, completing the 2018 seasons with them both.  She played with the New Recession Jazz Band for several years.  She helped establish the Lincoln St. and Portland St. school libraries and volunteered with the PTA.  Later she worked as a secretary with the St. J. School District.  After retirement, monthly breakfasts with “the girls” from the office kept each other up-to-date with family and school news.

Family was central to her activities: reunions, genealogical research, sending greeting cards and Christmas letters. She was past Regent for Saint John de Crevecoeur chapter DAR, trustee for VT DAR John Strong Mansion, and a charter member of Northeast Kingdom Vermont chapter of Daughters and Patriots of America.  She and Thel served as officers with the local chapter AARP for years, and were active in the local Retired Teachers Association.  They were members of numerous historical societies in Vermont.  Marge enjoyed completing crossword puzzles, sewing, embroidering and knitting.

She enjoyed the daily activities and support of the caring staff while at the Pines. Her smile would brighten the room.  The celebration of her 95th Birthday extended for several days and made her feel much loved and very special.  An exceptional lady and role model, she is now in heaven with departed loved ones.

Family services and burial will be at Fairview Cemetery in Bethel VT in September.

To order memorial trees or send flowers to the family in memory of Marjorie Brown, please visit our flower store.