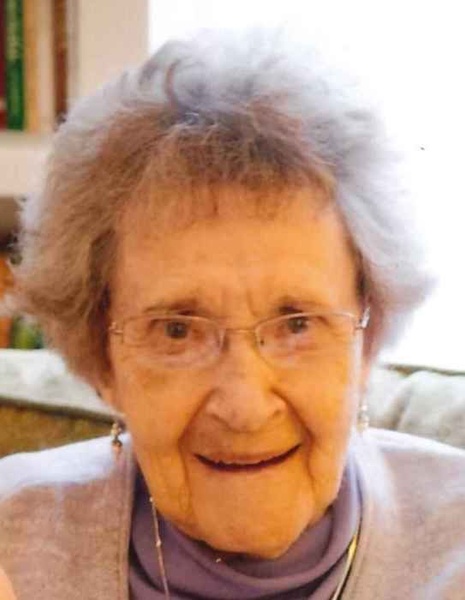 Pat was born in St. Johnsbury on June 27, 1929, daughter to the late Roy and Frances Dorothy (Cassidy) Collins.  She was raised and educated in St. Johnsbury graduating from the Academy in the Class of 1947.  In a winter wedding in 1949, she married Frederick Ernest Douglas. They shared 56 years together until Fred’s death in 2005.  Before Pat married, she worked at Parker´s Drug Store and then at New England Telephone as an operator.  She was a stay-at-home mom while her children were small and beginning their school years. From the early 1960s until her retirement in 1991, Pat worked for the Vermont Department of Employment and Training. She began as an interviewer/claims taker and eventually was promoted to be the manager of the office.

Pat was an active parishioner and volunteer at St. John the Evangelist Church. She also volunteered at polling sites and at the Alumni Office at St. Johnsbury Academy.  She was an avid golfer, reader, Mahjong player and knitter. She attended many SJA events, never missing any athletic, music, or drama event in which her children and grandchildren participated. Also, Pat enjoyed watching the Celtics and Patriots games on TV.  Being with family was the most important aspect of Pat´s life. She hosted a multitude of family celebrations throughout the years, cooking up wonderful meals and desserts.

She was predeceased by her husband: Frederick Douglas; and a daughter-in-law: Christine Ann (Desilets) Douglas.

A Mass of Christian Burial will be celebrated at 11AM on Monday, April 15, 2019, at St. John the Evangelist Catholic Church with Fr. Karl Hahr as celebrant.  Burial will take place at Mt. Calvary Cemetery at noon on Tuesday, May 28, 2019.

Friends may call on the family from 3-5PM Sunday the 14th at the Sayles Funeral Home, 525 Summer Street in St. Johnsbury.

Memorial donations may be made to either: Canterbury Inn Activities Fund, 46 Cherry Street, the SJA Alumni Program, 1000 Main Street, or Caledonia Home Health and Hospice, 121 Sherman Dr., all addresses in St. Johnsbury, VT 05819.

The family would like to greatly thank the staff at Canterbury Inn for their immeasurable care for Pat and her family, and also many thanks for the care and concern from the Hospice team in all that was done.

To order memorial trees or send flowers to the family in memory of Patricia Douglas, please visit our flower store.