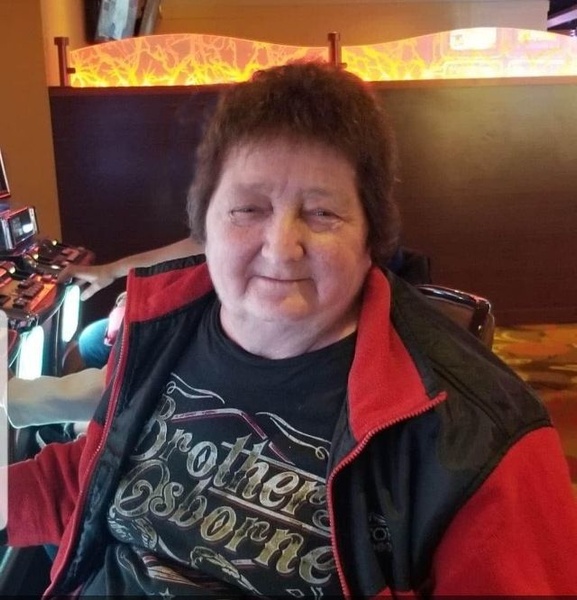 Regina was born on August 21, 1954 in St. Johnsbury, VT the daughter of Reginald and Fargo (LaRoche) Switser.  She was raised and lived in West Burke, Lyndonville, and also lived in Colebrook, NH for a time.

Regina first worked with her dad building cabinets in homes, pouring foundations, driving dump truck and operating equipment.  Regina loved farming and operated two of her own farms in Newport Center and Troy.  You could often find baby goats or a calf in the house being nursed.  She owned and operated R&R General Auto Repair in West Burke, VT and then in Pittsburg, NH.  She did maintenance and certified inspections as well as major repairs and wrecker service.  She was a great mechanic.

She had a mobile home transport truck and moved several homes.  She took pride in painting houses.  Regina could build anything and built three of her own homes.  She helped family and friends with many projects.

Regina was a lover of all animals.  As a girl she would sneak strays in the house through the bedroom window; horses being her favorite.  Her love of horses began when she worked, rode and pulled her father’s ponies.  Her first riding and show horse was Apache, they enjoyed trail rides together.  She also did Gymkhana with her horses Zach, Majigger, and Princess.  She won several championships and was invited to the Nationals in Tennessee.  Later in life, she had miniature horses that her grandchildren enjoyed with her.  She loved horse shows and pony pulling.  There was not a horse she wouldn’t ride.

Regina was a lover of the outdoors.  She was a hunter, snow mobile rider and racer as well as a skier. She enjoyed playing bingo with her mom and sisters, watching family members race at Groveton Speedway, camping and fishing with her grandchildren.  She loved the fairs, especially Fryeburg, where she bet on the harness racing.  Treating her grandchildren to the midway brought her much joy.  Regina, her son and nephews spent many hours together building demo cars and she competed alongside them and her siblings in her car #54.

Regina had a love for music of all types; Jim Croce, Pat Benatar and Jason Aldean were a few of her favorites.  She loved the excitement and friendships she formed at her second home, the Oxford Casino.

Regina cherished her family and time spent with them.  She treasured holidays with Reg, Angela and her grandchildren.  Regina was a lifetime member of the American Legion and could make a friend anywhere she went.

She was predeceased by her parents; and two siblings, Stephen Switser and Audrey Switser Hearne.

In lieu of flowers, donations in Regina’s memory can be directed to Pope Memorial Frontier Animal Society, 4473 Barton-Orleans Road, Orleans, VT 05860 or the American Legion, Post # 17, US-3, Groveton, NH 03582.

Friends may call on the family from 5-7pm on Saturday, May 21, 2022 at the Guibord-Pearsons Funeral Home, 15 Main Street, Lyndonville, VT.  A funeral service will be held at the West Burke Methodist Church, on Sunday, May 22nd at 3pm with Rev. Ann Hockridge officiating.  Burial will immediately follow at the Hillside Cemetery in West Burke, VT.

To order memorial trees or send flowers to the family in memory of Regina C. Switser, please visit our flower store.