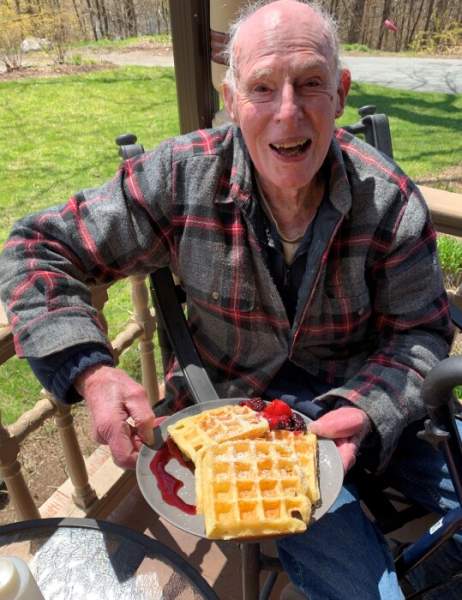 Robert (Bob) L. Cousins, 99, of Edge Hill Rd in St. Johnsbury, VT passed away peacefully at his home with his family beside him on Thursday, December 16, 2021.

Bob was born on June 15, 1922, in Concord, MA to Robert and Ola (Keyes) Cousins. He was raised and educated in Concord, MA. He graduated from Concord High School, Class of 1940, where he played hockey and football. Bob still holds the record for running the most yards for a touchdown - having started in the endzone he ran 104 yds for the touchdown. Bob went on to obtain a bachelor’s degree from the University of Massachusetts at Amherst. Bob served in the U. S. Army Signal Corps in France during WWII. After the war, Bob worked for his father and uncle operating Cousins’ Greenhouses in Concord, MA, where they grew carnations. He took over operations in the 1950’s and had the business until late the 1960’s. He then went to work at Russell’s Garden Center in Wayland, MA. In August 1961, Bob married Evangeline Bill and shared 34 years with her until her death in July 1995. The couple lived in Concord, MA until retiring and moving to St. Johnsbury, Vt in 1989. Bob was an active member of the United Congregational Church in St. Johnsbury, as well as the West Concord United Church of Christ in MA. Bob enjoyed a full and happy life. After moving to Vermont, Bob was soon acting as a Site Supervisor on Habitat For Humanity projects, and later volunteered serving the community lunch every Wednesday for over 15 years. Bob was devoted to his family and worked hard to make sure his family had what they needed. He converted cargo vans into pop- up campers, before it was the thing to do, and took the family camping for three weeks every summer. They traveled all over the northeast and into Canada. Some of his favorite places to travel to were Maine, New Brunswick, and Nova Scotia. Bob made sure his family respected and enjoyed the outdoors and they spent many hours sailing, hiking, biking, and skiing (his last time at the age of 97). Bob also enjoyed spending time at the cottage on Cape Cod, and the camp on Lake Willoughby in Vermont. Bob patiently taught his children and grandchildren how to take care of and maintain a house, everything from roofing to plumbing. On occasion Bob would take off for months at a time either alone or with David traveling across the country to visit the National Parks, and friends and relatives.  As Bob grew in years, he enjoyed the peacefulness of summers at Lake Willoughby and reading on the porch at his house in St Johnsbury. Bob will always be remembered for his dry sense of humor, and his “Old New Englander” work ethic and his desire to help others. When you would come to see Bob you never knew just where you would find him, reading on the porch or up on the roof shoveling snow.

Bob is survived by two children: David of St. Johnsbury, VT and Katherine of Hancock, NH; two grandchildren: Jaclynn and Wubalem; and one great grandchild: Paul-Alexander. He was predeceased by his wife: Evangeline, and a brother: Norman.

Burial will take place at the Pleasant View Cemetery for the family in Orleans in June with a public Celebration of Life service at the Westmore Congregational Church with Rev. Jay Sprout to officiate. Date and time TBA.

Donations can be made in Bob’s name to Habitat for Humanity in the Northeast Kingdom, 459 Portland St., Suite 2, St. Johnsbury, VT 05819.

To order memorial trees or send flowers to the family in memory of Robert Cousins, please visit our flower store.