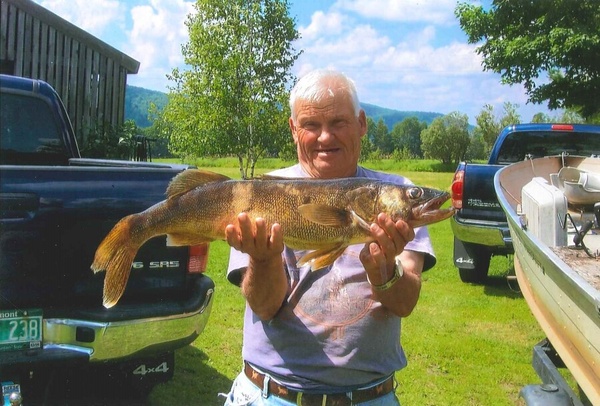 Russell was one of twelve children born to the late Wilton and Helena Gray. He grew up in Brockton, MA and after high school, joined the Air Force.  He was eventually transferred to the old Radar Base that was on East Mountain in Victory, Vt.  Once he was discharged from the Air Force he stayed in St. Johnsbury, and in 1968 began working for the St. Johnsbury Fire Department and served as Fire Chief from 1986 until his retirement in 1996.  In 1984, Russell married Marsha Macpherson and set up house in Waterford.

Russell loved hunting, fishing and his hunting camp on Paul Stream Road in Maid Stone, Vt. where he and his brothers, nephews and friends spent many happy times. But Russell’s real joy was his fishing. He would hook up the boat and go. One fond memory is when Marsha and her friends were standing in the yard getting ready to go hiking. Russell had the boat hooked up and was leaving the yard to go fishing. On the lawn was a very high flagpole with flag. As Russell started to head out, he drove right over the flagpole and down it went. He got out of the truck, got the flag and folded it up, put it in the truck and took off with the boat in tow. He’s going fishing.

Later in the summer, a Celebration of Russell’s Life with a gathering of family and friends will be held at his camp. His wishes were for his ashes to be scattered there. All are welcome. Details will be announced through a notice in the paper.

Memories and condolences can be shared with the family online at www.saylesfh.com

To order memorial trees or send flowers to the family in memory of Russell Gray, please visit our flower store.