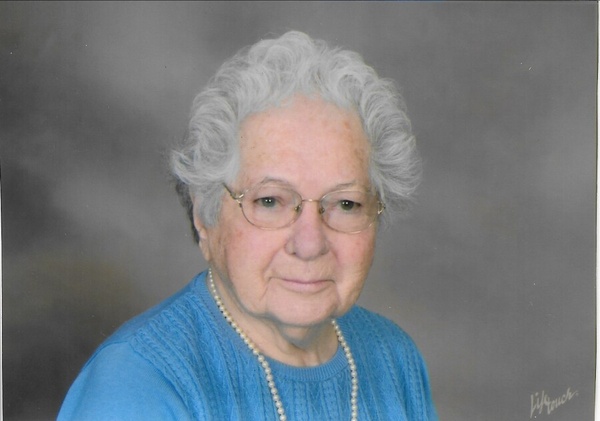 Ruth L. Blake of Wheelock, Vermont, passed away peacefully in the comfort of her home, surrounded by family on November 23, 2020.  She was the last surviving child of Edwin and Josephine LaBrake; predeceased by her four siblings: Lawrence, Jean, Marguerite, and Carol. Ruth, just a few weeks shy of her 98th birthday, was a native of Woodbridge, Connecticut. After graduating from Commercial High School in New Haven, CT, she spent much of her adult life in Ansonia, CT, before retiring to Wheelock, VT in the early 1980s with her late husband, George.

She met her husband, George R. Blake, Sr., at a barn dance and eventually married on June 12th, 1943. They were together for over 57 years, raising three boys and running a successful bus company together, prior to his passing in 2000. She spent the last twenty years living independently in her Wheelock, VT home, often spending time in the community with close friends like Linda Lyman, and the late Linda Stimpson and Patricia O’Hagan.

Ruth was an exceptional, detail-oriented bookkeeper, entering the workforce just two days after she received her high school diploma. She became a lead bookkeeper at Anaconda American Brass (Ansonia, CT) before teaming up with her husband to operate both the Blake Bus Service and Fitzgerald Bus Company.

Ruth was a dedicated member of St. Elizabeth Church, serving her community as a member of the Women’s Group. Her selflessness in service was recognized in 2009 as an honoree for Women in Ministry within the Burlington Diocese.

Ruth, deemed by all who knew her as a “doer”, was an avid football fan, travel enthusiast, crafter, and snowmobiler. She began snowmobiling in 1968 and received two awards from the Vermont Association of Snow Travelers: Snowmobiler of the Year (2011) and Trailblazer Award (2016).

She is survived by her sons George Blake, Jr. and wife Diane of Wheelock (VT), Kenneth H. Blake of Middlefield (CT), and Kevin M. Blake and wife Karen of Ansonia (CT);grandchildren Jennifer, Melissa, Brian, Kelley, and Lindsay; great-grandchildren Alexander, Paul Jr., and Lily; and many nieces and nephews.

Arrangements are being handled through the Guibord-Pearsons Funeral Home of Lyndonville, Vermont. Memories and condolences can be shared with the family at  www.guibordfh.com. Donations in Ruth’s memory can be made out to St. Elizabeth Church, 49 Winter St. St. Johnsbury, VT 05819 or Lyndon Rescue, Inc. PO Box 401, Lyndonville, VT 05851

Due to the latest Covid-19 restrictions, a wake will begin at 10a.m. on Saturday, December 5th at St. Elizabeth Church in Lyndonville, VT, immediately followed by an 11a.m. funeral mass, concluding with a burial at St. Elizabeth Cemetery.

To order memorial trees or send flowers to the family in memory of Ruth Blake, please visit our flower store.