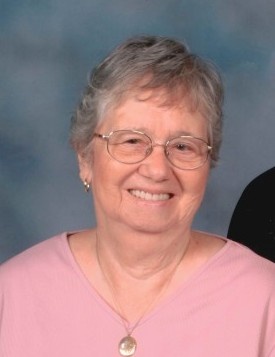 Ruth was born in St. Johnsbury, VT, on July 22, 1933, daughter to the late Merton and Annetta (LaBranche) Amidon.   She was raised and educated in St. Johnsbury, at Mount St. Joseph Academy.  As a young woman, she worked as a dental assistant in town.  She met her husband, Maurice LaRose, at his sister Yolande’s wedding.  They married on May 1, 1954, and shared 63 years together—until his death in 2017. They made their home in St. Johnsbury raising five children and moved to Danville in 1971.  Ruth and Maurice established LaRose Public Trucking in 1969, and Ruth managed all the billing and paperwork until their retirement in 1996.  They built a new home in Danville in 1987 where they lived out their retirement.  Ruth and Maurice moved back to St. Johnsbury in 2007.  They wintered in Florida for over 15 years with the last several being in Webster.  Throughout the years, Ruth was an active parishioner at St. John the Evangelist, including teaching religious education classes and serving as a Eucharistic Minister. Ruth and her beloved Maurice were avid square dancers, and she sewed many of the outfits they wore.  Ruth was talented with knitting needles and her children, grandchildren, and great grandchildren were the recipients of beautiful sweaters, hats, mittens, and afghans.

Friends may call on the family from 6-8PM Thursday evening February 20th at the Sayles Funeral Home, 525 Summer Street in St. Johnsbury, VT.

A Mass of Christian Burial will be celebrated at 11AM on Friday, February 21st at St. John the Evangelist Church on Winter Street in St. Johnsbury with Rev Fr. Robert Little as celebrant.  A Private burial will immediately follow at the Mt. Calvary Cemetery.

To order memorial trees or send flowers to the family in memory of Ruth LaRose, please visit our flower store.