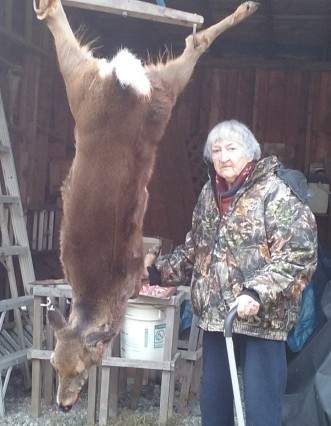 Waterford, VT: Vera Wark, age 78, of Green School Road, passed away at Weeks Memorial Hospital surrounded by her family, in Lancaster, NH, on Monday, July 2, 2018, following a short decline in her health.

Vera was born in Lancaster, NH, on December 20, 1939, daughter to the late Albert and Amelia (Therrien) MacDonald.  She was raised and educated in Littleton.  She married Donald F. Wark in 1976 and moved to Connecticut.  There she enjoyed working at Crescent Manufacturing, setting up and operating screw machines. In 1979 they built their log home and moved to Waterford, VT.  She then worked in maintenance at the white mountain school for many years enjoying conversing with the students.

Vera enjoyed the outdoors. Hunting and Fishing were her two favorite passions, being very successful at both. She loved sharing her adventures with friends at the office.  Her sense of humor and perspective on life will be deeply missed. Vera had many other hobbies throughout the years including making maple syrup, choke cherry wine, and trapping.

Vera was a long-time member of the Littleton VFW and American Legion Post #68, which she loved calling “The Office.”

She was predeceased by her husband of thirty-five years, Donald, who died in 2011, her brother Jack MacDonald and a beloved daughter: Sandra MacDonald and stepdaughter Brenda Madonna.

A Celebration of life will be held from 5 - 6 PM on Friday, July 20, 2018, at the American Legion Post #68 in Littleton.  At her request there will be no calling hours and burial will be private at the Riverside Cemetery in Waterford, VT.

To order memorial trees or send flowers to the family in memory of Vera Wark, please visit our flower store.